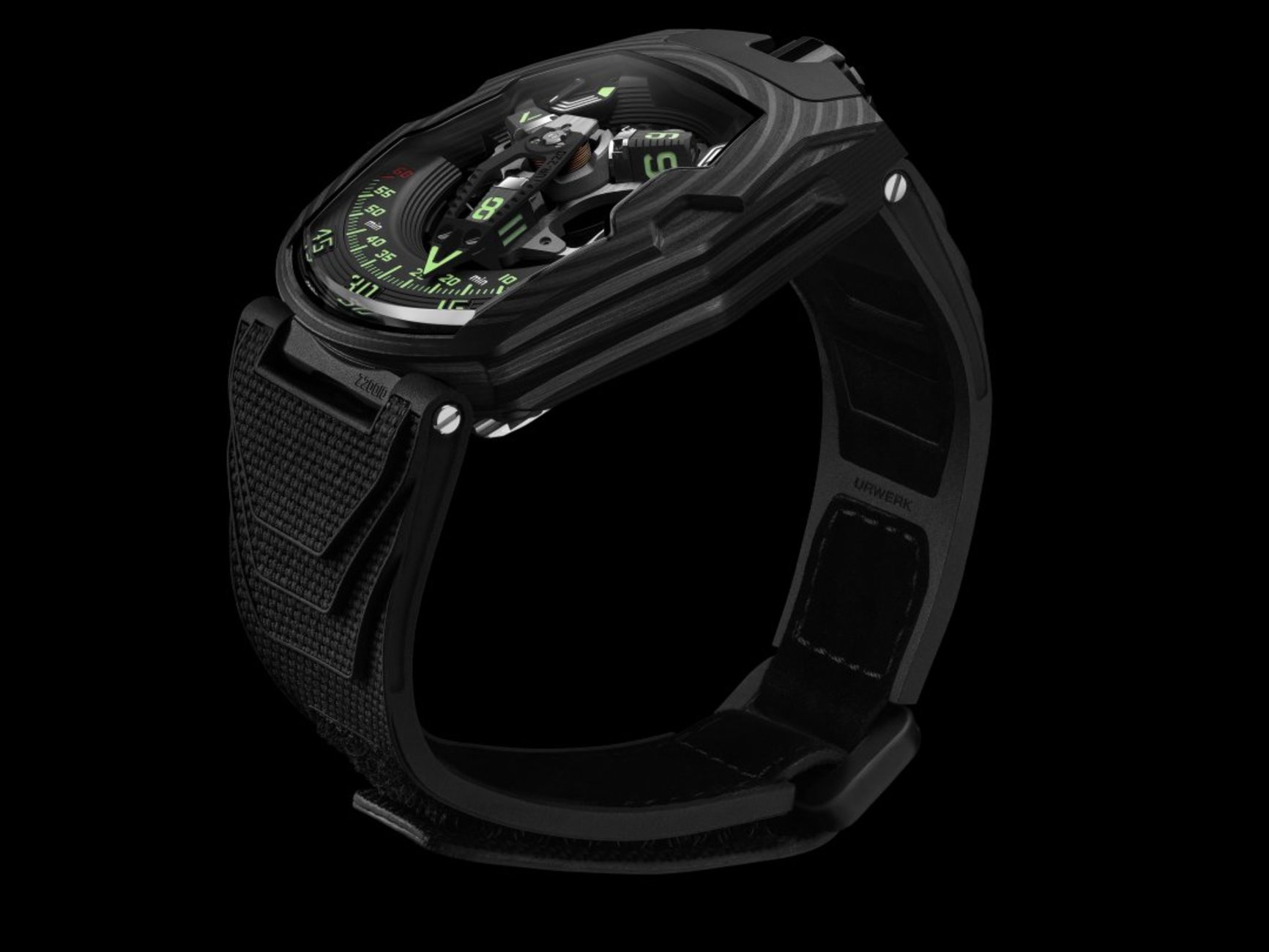 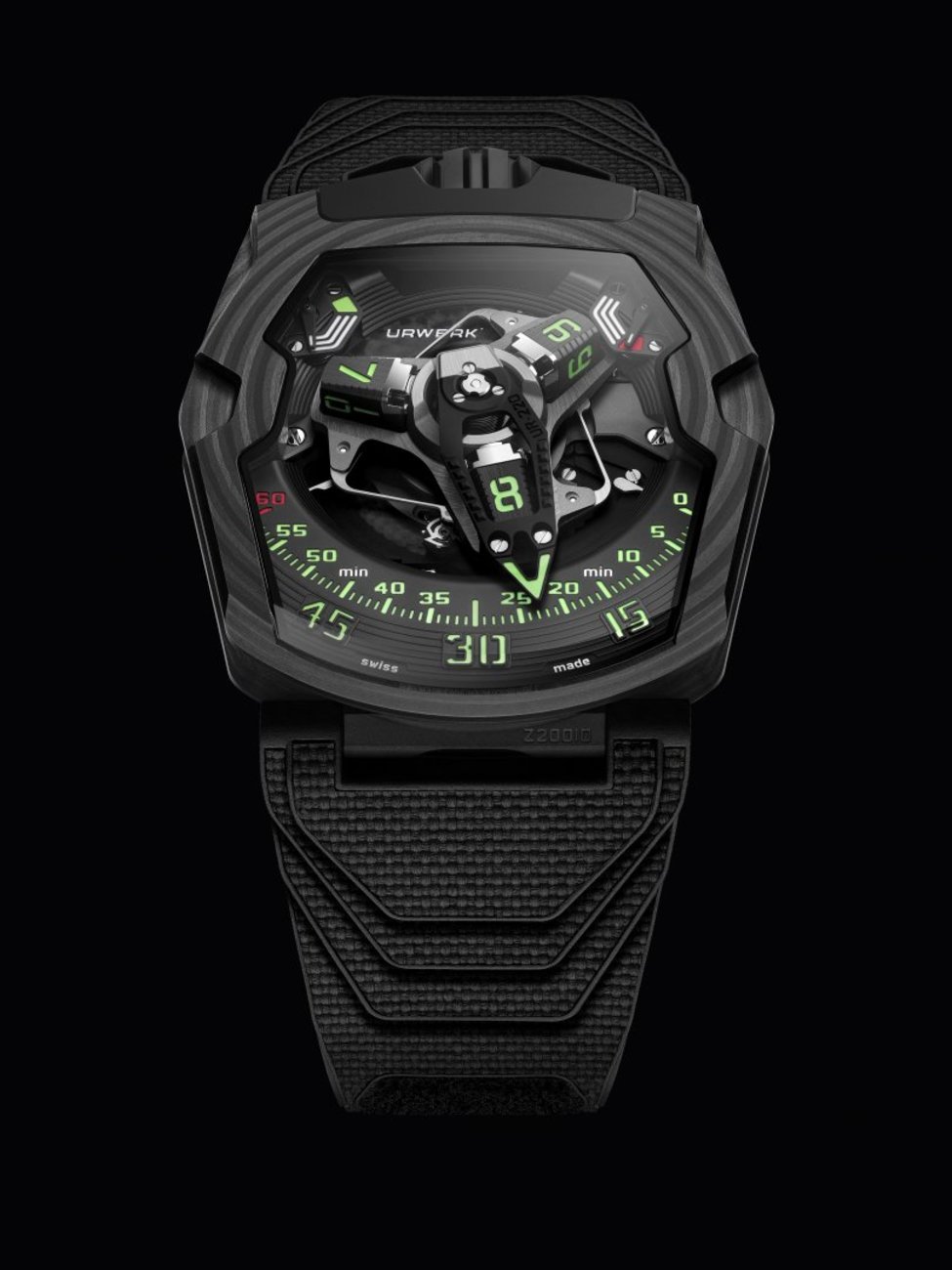 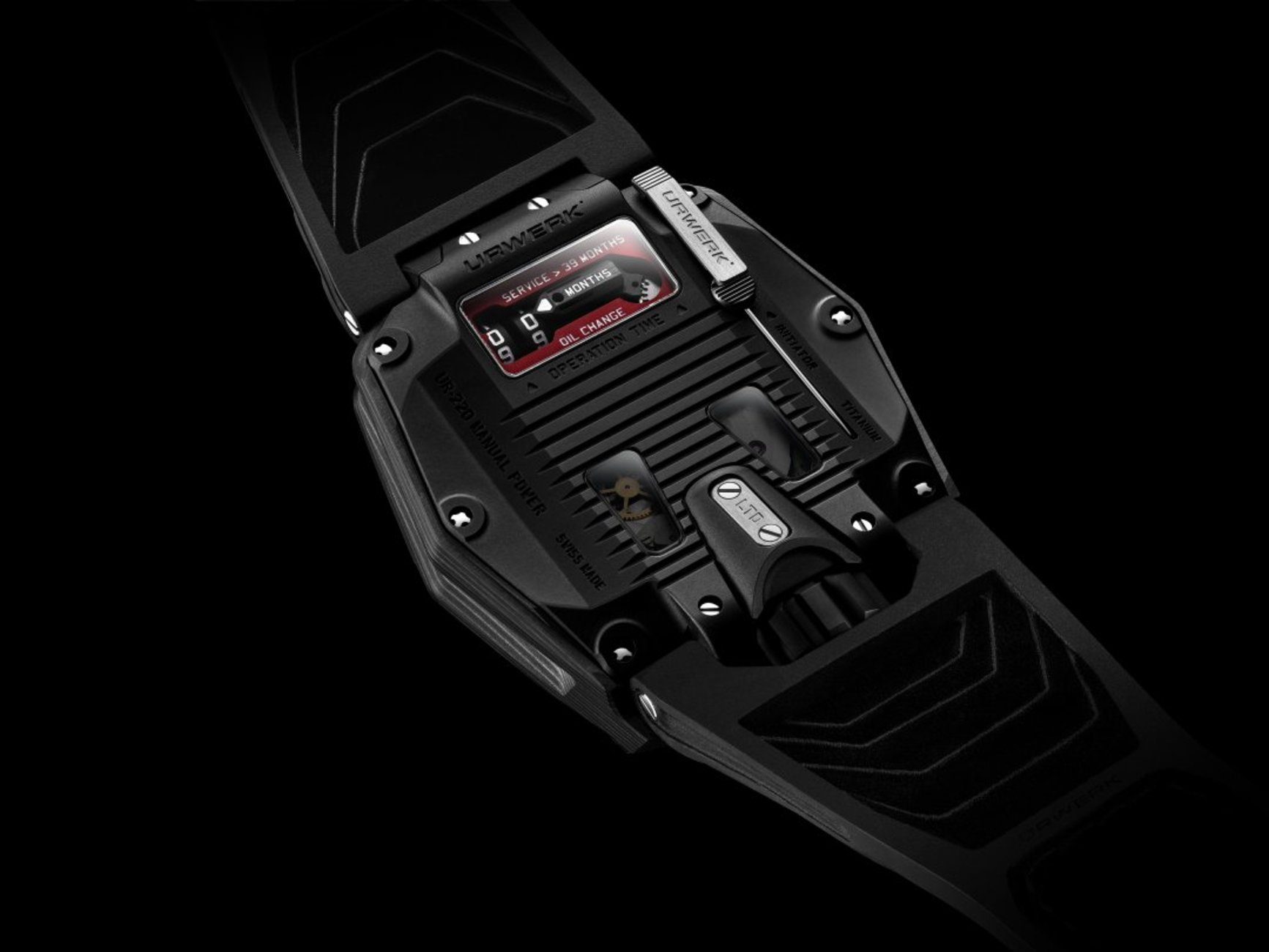 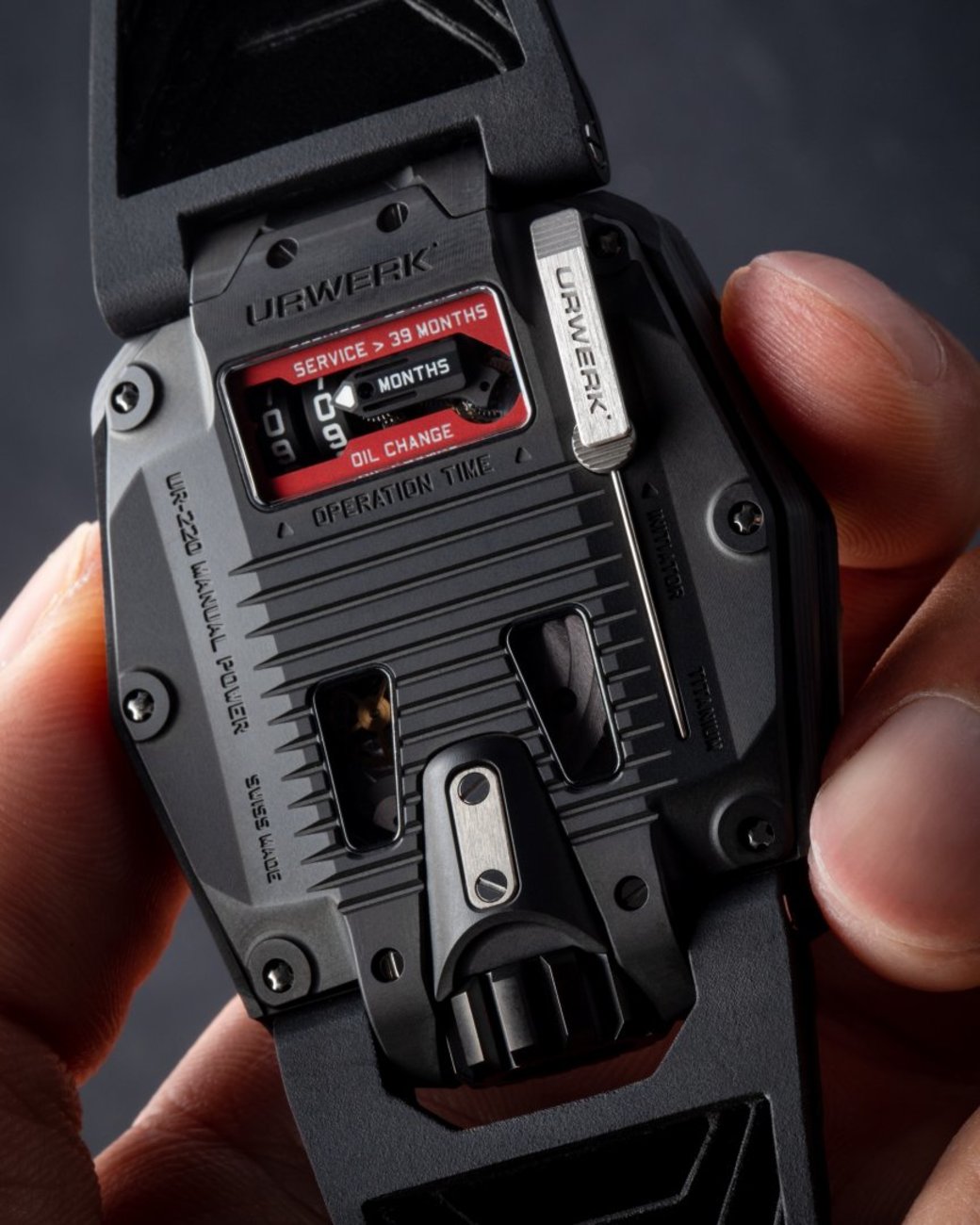 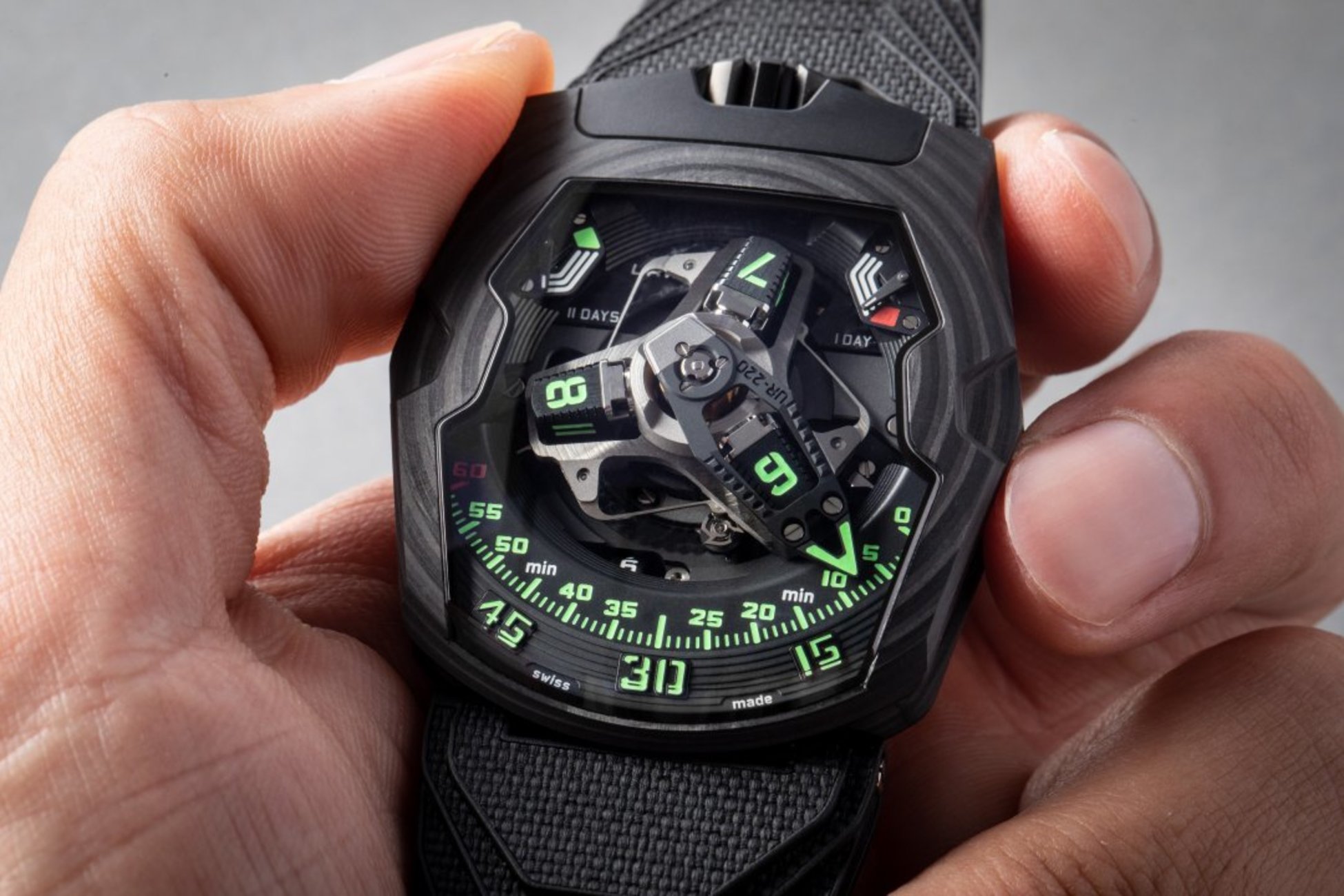 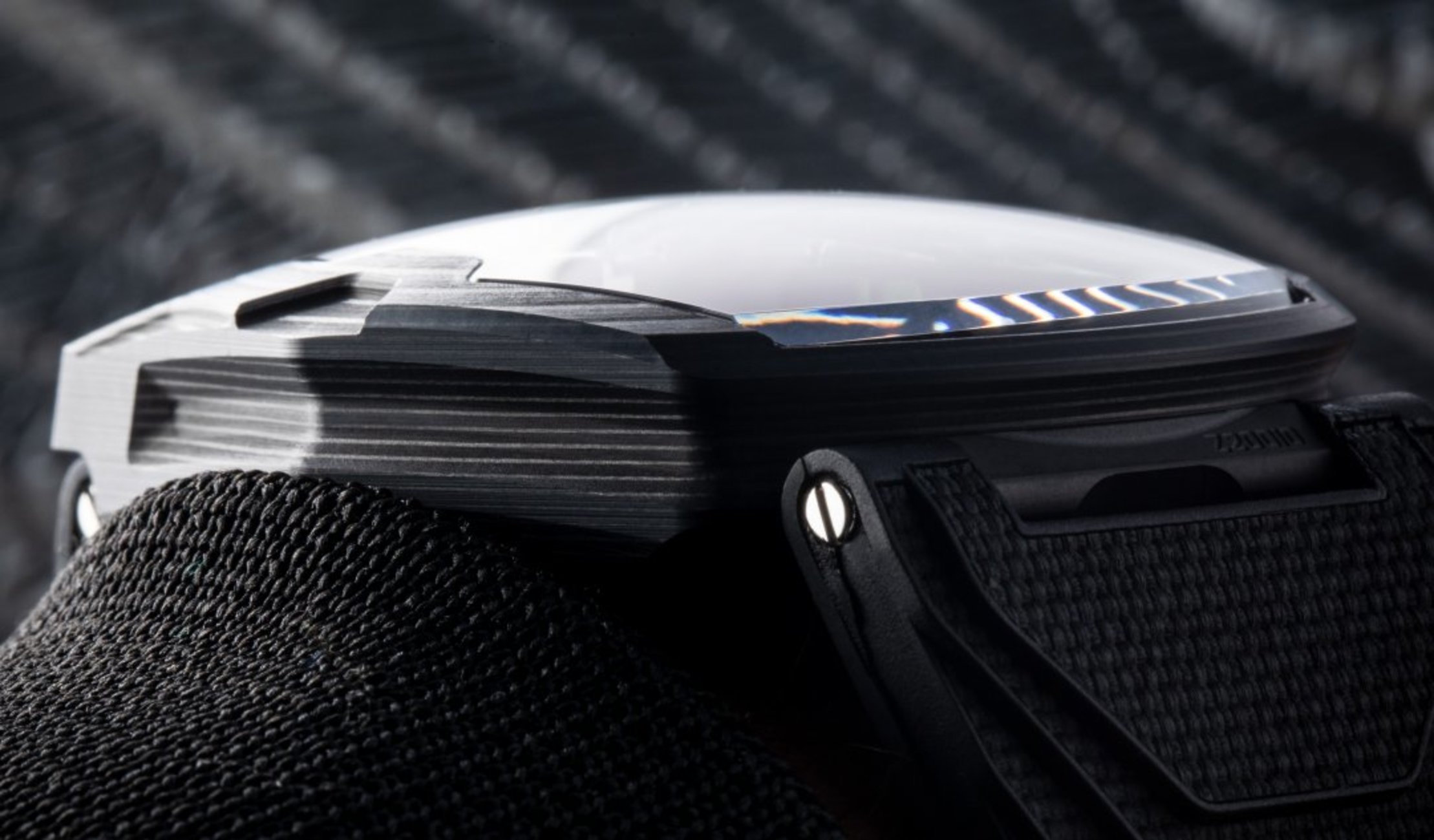 With its manually wound movement and control board on its back, the new UR-220 goes back to URWERK’s earlier technologies in a case that is sleeker, more ergonomic and as stunning as ever. One exceptional feature is the return of the Oil Change indicator in a new guise.

A quick glance to the UR-220 could be misleading. Look again because everything has changed here. Although the UR-220 has adopted some of the features of its predecessor, the entire movement has been reconceived, redesigned and reworked.

URWERK’s signature Oil Change indicator returns after years of absence to show the accumulated engine running time of the watch. In the UR-220, the Oil Change indicator takes the shape of a numerical counter calibrated in months, shown on two adjacent rollers. The log of the movement’s running time is started by the owner of the watch who removes a security pin and presses the pusher on the back of the UR-220. From then on, the counter displays the accumulated running time of the watch in months. When it reaches 39 months, it is time to take the watch in for a service and oil change.

On the material side, the UR-220 is clad in carbon. This is the first time URWERK has adopted the high-tech transformation of this common element. The result is an extremely tough but featherweight case, composed of 81 ultra-thin layers of high-resistance 150g CTP carbon compressed into a hard resin. The carbon structure of the UR-220 has a pattern all of its own with a finesse and regularity that emphasises the curve of the case.

The UR-220 adopts the patented satellite indication of its predecessor, in which the wandering hours are indicated on three rotating cubes. In turn they pick up the minutes pointer as they enter the 120° scale of 60 minutes. At the end of the hour, the minutes pointer leaps back to the start of the scale to be picked up by the next hour. To minimise the inertia of the retrograde minutes, each side of the pointer has been pierced to make it as light as possible. The only other indication on the dial is that of the power reserve. This is displayed on two up/down gauges, each of 24 hours. When the movement is wound, the right-hand gauge reacts first. As soon as it shows 24 hours of power reserve, the left hand gauge takes over. Splitting the power reserve indication turned out to be a complex task, requiring 83 mechanical parts.