The first 20 years of an exceptional calibre part 1

20 years ago François Paul Journe launched his revolutionary Octa movement. At the time, it was the frist automatic movement to provide 160 hours of autonomy. The international awards, the global success, and the value of his products strenghtened by the auction results, have amde the brand one of the most admired in our industry, and its history and vision are an inspiration for Journe’s peers.

It was 2001 when François Paul, just after the launch of his first two watches, fulfilled another dream.

A watch brand, as imagined by François-Paul Journe, cannot base its business on Tourbillons alone. When the brand was founded in 1999, the Master already had in mind how to develop his collections: a first objective was the exploration of Haute Horlogerie complications aimed at improving chronometry – that is, pure time measurement – and then develop them in a different way, including the Tourbillon, the Résonance regulator or the constant force mechanism.

The second collection was directed towards practicality, portability and functionality, for everyday use. It was quite obvious that FP immediately thought of a self-winding movement.

But how to approach what had already been engineered  for over a century by every watch brand, and had reached high levels of practicality and precision? Simply by making it more practical and high-performance.

“If there’s one thing that can be done, I can certainly do it and, moreover, I can do it better!” François-Paul has always thought so, but unlike many who only think so, he actually succeeded in his intentions.
The Octa collection was born, as said, to be practical: the winding is automatic and with a long power reserve, the dial is always legible even when wearing formal suits, other functional indications are included, and it is quite small and ergonomic.

To achieve this result, FP redesigned the movement from scratch, starting from the need for a greater chronometric power reserve of five days, as he established. There is no lack of explanation in this case either. As you can imagine, Journe’s idea was absolutely rational: people usually wear a “formal” watch with their working days outfit. On weekends they might prefer to wear more casual clothes and, perhaps, a sports watch.
The “formal” watch therefore remains in the drawer and, if its power reserve is 36 hours at maximum charge, when Monday comes you will find it discharged and idle. Since his new device had to be practical, he needed to overcome the power reserve problems that are typical to all mechanical watches – even the self-winding ones. Therefore, the power reserve should have allowed the watch an autonomy of at least, 5 days, or more if when taking long weekends into account. The initial development of the Octa movement was therefore aimed at solving this problem, which at the time of the first designs, in 1997, had not yet been addressed by other manufacturers.

FP had in mind a barrel with a lengthy spring: about one-meter long for a height of 1 mm. This required the spring torque to be low in order to be easily and quickly charged by the winding rotor.
The rotor preferably needed to be heavy, made of a 22-carat gold mass, and self-winding at every slightest movement of the wrist – therefore better if unidirectional.

Another problem to solve was the regulator. With little torque available, the balance wheel needed to be light and fast but, precisely because it was small and light, it was sensitive to disturbances and small shocks and, in the end, not very stable. FP, on the other hand, designed a large balance wheel – 10.1 mm in diameter – with high inertia, the free-sprung chronometer balance being adjusted by four turning weights on the spokes of the wheel, ensuring stability. The vibrations per hour: 21,600.

This was the heart of the new Octa collection.

But the devolepement introduced another essential feature, unique in the Haute Horlogerie panorama.

Picture yourself in Paris, sitting at a cozy bistrot in the Quartier Latin: you are seated at the table with your friend, waiting for your dinner. You are young, your head is full of ideas, and you have a great desire to share and discuss them.

The small square table is crowded with dishes and tableware arranged on a white paper placemat (the milky-coloured, unrefined ones). The wine is certainly not missing, in fact it is flowing: invariably red and Tuscan, just as you like it.

You’re holding a pen and, absorbed in the discussion, you start to explain, draft and sketch your ideas. You draw your company’s future products, which, at the moment, only exist in your youthful enthusiasm, but your friend knows you well and understands everything.
The dinner is over and your ideas are now clearer and stronger.

If that’s not how it happened, it’s not very far from it.
FP actually drafted his project on a paper placemat – now framed on the wall of his Geneva manufacture – in a Parisian bistrot. The design represents the dials of the future Journe collections since, for FP, a real project actually starts from the dial.

The Octa calibre can accommodate different functions such as: power reserve, large date, moon phases, annual or perpetual calendar, chronograph, second time zone…
These are all practical functions that can come in handy in daily life.
This, in my opinion, is FP’s masterstroke. Enclosed in a medium-sized calibre, 30mm diameter by 5.7mm maximum thickness, we find the large barrel, the balance-wheel and one or more of these functions integrated into the movement. Without adjustment pushers, and the crown vertically centered with the thickness of the calibre. Incredible.

In fact, it is the basis of an automatic movement designed to house one or more integrated functions. The functions must therefore adapt to the milling and drilling common to other complications and fit into a space just 1mm high which characterises the movement base.
But these are not simple functions. Think of the differences between a chronograph and an annual calendar: completely different mechanics that must be integrated in the same space and put in motion by the same base.

Respecting the designs sketched on the placemat, FP studied his movement with the time sub-dial placed on the right side of the watch – crown side – and the functions on the left. This way, the time is always visible, even with the watch is partially hidden under a shirt’s cuff. If you want the other information, just uncover the entire dial. There were no watches like Journe’s on the watchmaking scene at the time: the looks were unique, perfectly in tune with his 1999 Tourbillon. The 38mm-diameter case was made of platinum or red gold; the dials had a yellow-gold plate with silver sub-dial frames screwed on. Obviously, these changed depending on the functions.

The first model presented to the world by the Master was, logically, the Reserve de Marche which emphasized the 5-day power reserve. This was 2001, a great year for the newly-established Montres Journe.

For François-Paul Journe, 2001 was an exceptional year. His dream of presenting the Tourbillon Souverain and the Chronomètre à Résonance, branded F.P.Journe Invenit et Fecit, came true.
He signed a contract with Harry Winston, the renowned American jeweller, to provide 3 movements for the Opus 1, progenitor of the famous and successful collection commissioned by director Maximillian Büsser.

In Geneva, he found in 2000 the perfect place to establish his watch: an industrial building in the historic city centre without any structural constraints, allowing him to organise the space as he so wished.
Finally, he was already planning a dial factory, in partnership with Harry Winston, to make projects that would  totally differ from traditional production.

Everything was already in motion, time could not be stopped.
The Octa Caliber – FPJ 1300 – was ready to carry on the transformation of a Haute Horlogerie atelier into a real brand. 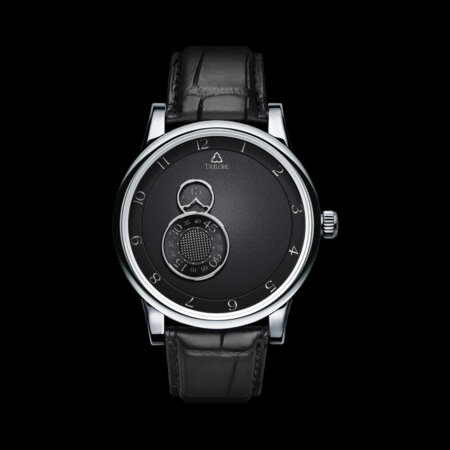 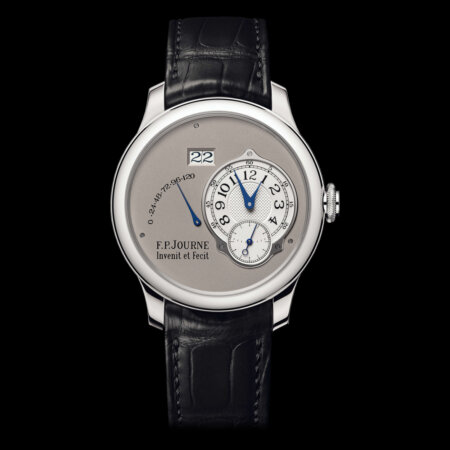