F.P.Journe and the Tourbillon part 2

F.P. Journe’s first wristwatch couldn’t have been anything but a Tourbillon, powered by a single mainspring controlled by a remontoir d’égalité to maintain a constant energy transmission for up to 32 hours. It is 1991, the watch features simple finishings, recalling that it is handmade. This item already presents all the aesthetic qualities that will characterise his entire future production.

Dial shifted to the right side and screwed to the mainplate, power-reserve display and the huge Tourbillon in a symmetrical position with respect to the dial. At 6 o’clock, the remontoir d’égalité. The case is simple but elegant together with the dial – with roman numerals and Breguet style hands – are quite particular. But the first assembly produced watch and the creation of his own Manufacture are still 8 years away.

It is 1999. The 38-mm case made of platinum, has a classic shape and features details which will be part of all future models.

It sis made of a carrure holding the crown exactly in the middle of its depth, bezel and caseback of identical dimensions, both with a sapphire glass. The dial is unconventional but reflects his past and culture. The first pieces feature a gold plate with a silver hours sub-dial with guillochage, while the Arab numerals are printed in a specific font. The hands are made of a special blued steel. The dial is held in position by a steel disc screwed to the gold plate. These features characterise almost all F.P. Journe’s watches. The power reserve and two openings at 9 and 6 o’clock to look at the Tourbillon and the remontoir d’égalité complete the dial.

The graphic layout is of course functional. While wearing a suit, the hours on the right side are always visible even when the watch is half covered by the shirt’s sleeve. All that is optional such as the power reserve, aesthetic details, openings on the Tourbillon and the remontoir, are visible only if necessary.

The movement is a further evolution of the ’91 model. The finishings are now typical of haute horlogerie with mirror-polished parts, a perlage or a Côte de Genève and anglage on the bridges. The bezel at the bottom of the case has very deep engravings and is held in place with special screws, impossible to unscrew without the right tool. F.P. Journe wants his creations to be treated only by the technicians who originally assembled them.

As of technique, the Tourbillon’s cage is made of only 60 elements, and the power reserve lasts up to 42 hours.

A curiosity about the power reserve: the display on Journe’s manual winding models (Souveraine collection) starts at zero. This characteristic comes from the marine watches. The power reserve marker used to display how many hours had passed since its last charge. And F.P. Journe intends to do the same in his “accurate chronometer”.

These features confirm F.P. Journe’s great attention to details and define his personality.

The Tourbillon Souverain will be produced as well in a famous 99-piece limited edition: 40 mm made of platinum with a Ruthenium dial; and another limited edition long after, in 38 pieces with a 38 mm steel case. Finally, Journe’s movement will be mounted in 2001 by the famous jeweller Harry Winston on the first watch of the OPUS series.

After 7 years, F.P. introduces a new Tourbillon Souverain to the world, with an updated 18-carats rose gold movement, redefined in every detail. An incredible watch, designed with maniacal care for every aspect. I have always been struck by its perfectly harmonious aesthetic appearance, full of creative details and designs that only after careful observation emerge in their exceptionality.

And unsurprisingly there is a rule in this watch: everything revolves around the number 3.

Let’s take the dial of the platinum version: on the grey-gold disc, a steel structure is fixed presenting three round openings – for the Tourbillon, the hours/minutes, and the seconds.

Every opening is held in place by three screws. These screws are arranged in an equilateral triangle. By adding the power reserve hand at 12 o’clock, another equilateral triangle appears between the hand’s axis and the axes of the hours and the Tourbillon. The watch thus looks perfectly symmetrical, but just like for the strabismus of Botticelli’s Venus, its beauty stands in the asymmetry between the Tourbillon’s pink colour and the white dial with the Journe blued hands.

The 40-mm case features a thicker bezel which is perfectly proportioned to the overall dimensions.

The new technical features as well are outstanding: the remontoir d’égalité is now connected to the seconds hand, moving one second at a time with discrete jumps between them. This particularity in the horlogerie world is called “dead-beat seconds” because, within its ticking, each second goes through birth and death.

In 2004, with the Tourbillon Souverain avec Seconde Morte, Journe wins at the GPHG in Geneva the most coveted prize: “l’Aiguille d’or” – the golden hand – the biggest international recognition that rightfully places him among the great Master Watchmakers in the history of watchmaking.
This Tourbillon will remain in production until the end of 2018, and be revisited in many different versions produced in limited editions, in addition to the standard grey or salmon dial models.
The last of those versions was the stunning Coeur de Rubis, characterised by a ruby plate applied on the dial. Journe’s top-rated tourbillon though was the one auctioned at Only Watch with a tantalum case and magnificent blue dial, sold at the astronomical price of CHF 550,000.

DEDICATED TO HIS SUPPORTERS

Thirty years have passed since his first pocket watch with Tourbillon, and Journe, in 2013, is the owner of a manufacture producing almost 100% of the components for his watche, from cases to bracelets, to movements and dials. Almost one hundred employees and ten boutiques worldwide. With production limited to around 700 watches, he represents a cumbersome reality for his Swiss competitors.

Enthusiastic with these results, he decides to treat himself with a prize and share it with his best customers to celebrate together this 30th anniversary.

He redesigns his very first Tourbillon in order for it to be worn on the wrist, creating a masterpiece called “T30”. Journe sells this watch, produced in only 99 pieces, at a price almost without any margin, only to those who supported his development project by purchasing his watches over the thirty years of the brand’s history.

THE RENEWAL OF A TECHNIQUE

This splendid watch’s characteristics and its engineering reflect the original pocket watch: 60-seconds Tourbillon, the escapement is no longer a détente, but a lateral anchor and two parallel barrels to obtain a more stable force.

Dimensions are reduced to a 40-mm diameter, but the case is silver and gold again, with a massive carrure made of guilloché silver and two rose gold bezels. The lugs are connected softly to the leather strap – not alligator – to recall its predecessor’s strap made of leather as well. The caseback can be opened to admire, just like for the pocket watch, the big Tourbillon.

Finishings are now of superior, extremely high quality, with more elaborate anglage and polish – in line with the contemporary F.P. Journe manufacture production.

The dial looks like an exact copy of the pocket watch, with the two visible blued screws attaching it to the mainplate, the Roman numerals and Breguet hands, and the ivory colour on an antique grené finish. The only difference is that the “Paris” writing was replaced by the Latin motto “Invenit et Fecit” which completes the logo since 1999.

This series of 99 watches is followed by a small production of 10 pieces in platinum, one for each of his boutiques. Those entitled to purchase them are chosen by F.P. in person among the many who have requested the watch. 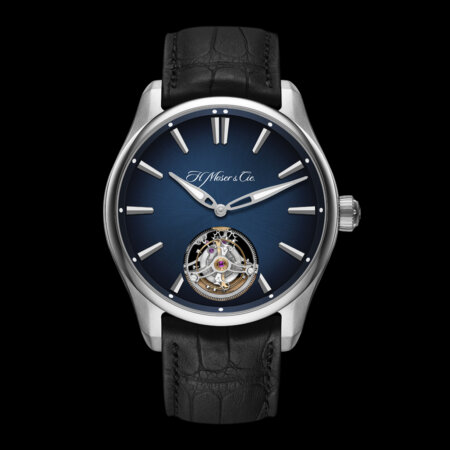